It was the "Burn Victim Look"

In December of 2007 Michael was seen with bandages around his mouth, while shopping at a book store with his children. Pictures from that day where taken and surfaced the internet, many wondered why the bandages where there.
The story that was making headlines was that Michael was accidentally whacked in the face by his younger son Blanket while playing around, and part of Michael's upper lip collapsed. Apparently his lip was so bad that he needed to get it surgically fixed. 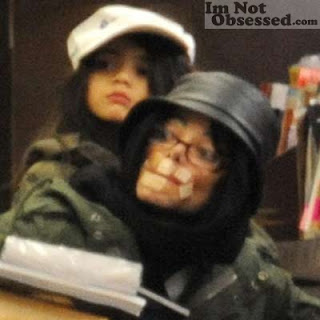 The media had reported that the reason for the bandages was due to MJ's lips bursting due to the accident with Blanket. Below is a report from "Extra":

Curiously though, during the GMA bodyguard interview, the topic of Michael's appearance at that time came up. They showed the pictures of Michael wearing bandages across the screen. When asked if Michael was hiding injuries under them, one of the body guards answered "No. That disguise to him was the burn victim"
You can hear this at around 5:15
Michael has been known for showing unique appearences in public. Most often, has been seen wearing masks, sunglasses and scarves, not so much bandages. So, why would they question the bandages over all his other disguises?
What does burn victim remind you of, Dave Dave perhaps?
The "disguise" really isn't a disguise, you can see it is MJ. So the bodyguards changing the story doesn't make much sense when they say he wanted to "disguise" as a burn victim. In light of the reports in 2007 where the explanation was given that an accident caused the surgery and resulting bandages, why would the bodyguards say that MJ was trying to disguise as a burn victim, now in 2010? And why a burn victim? In light of the Dave Dave Larry King Live appearance, it could make you wonder, and we are burning to know the truth... ;)
Posted by Diana Jean at 3:21 PM 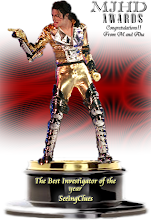